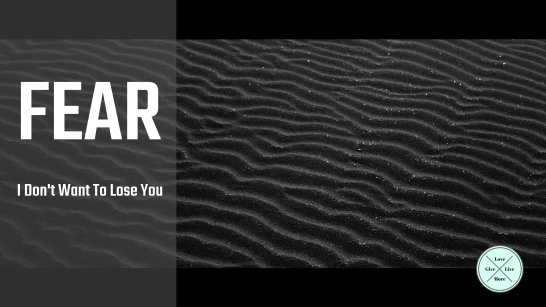 Before we begin: I started this series called “FEAR” two years ago this month. It has done me some good and hopefully has helped you recognize motivations in your own lives.

I have been learning more about myself as a result of delving into fear more than I ever have. It’s a beautiful thing, but it also has been hideous to see myself and some of the things I’ve done; all in the name of fear……I mean “friendship.” I’ve also been digging deeper into courage as I become more aware of fear and create new habits.

If you’ve been with me for a while, you know that I value my friendships. That’s no secret. At this point in my life, I don’t want to lose anyone. But I’ve allowed my fear of “not losing anyone” to become a crutch in my life. Nature often serves as an emblematic example of things occurring throughout everyday life. Just as seasons change, people are sometimes seasonal, too.

No one wants to be “taken for a ride,” or taken advantage of. But somehow, I allowed myself to be taken for one; but this time, I was driving. I allowed the fear of losing friends to run my life.

I thought that I could always befriend people and overlook almost anything when it came to friends (and many times, I did). However, as I become older, I understand that it’s okay to select who is allowed to sit at my table. I say it in that way because being “allowed” means that one was selected and therefore it bestows honor and respect. For me, I endured having “friends” sit at my table who didn’t realize it was an honor and behaved accordingly.

It’s one thing for me to be paranoid (which happens sometimes), but it’s another thing entirely when the vibe/spirit presents itself when I’m not looking for it. This may have happened in your own life. Maybe it was the cheeky comment that seemed to come out-of-nowhere about some news you shared. Maybe it was a feeling you got after you shared something you were really excited about.

Maybe nothing was said in response at all. Silence speaks the loudest sometimes.

The root of my issue has to deal with value. Value is defined as,”(n): the regard that something is held to deserve; the importance, worth, or usefulness of something.” How that applies to me is very simple: I didn’t value myself very much and as a result, accepted any show of gesture as friendship. Be careful of the things you accept in this season of your life.

[Now, if I delve into this topic, I will have written a treatise as it pertains to my life. Don’t worry: I won’t do that here: now. LOL. For now, let’s just say I’m an expert on the topic.]

I’ll stop here for now, but believe me: I have MUCH more to say about value.

One thought on “FEAR: I Don’t Want To Lose You”