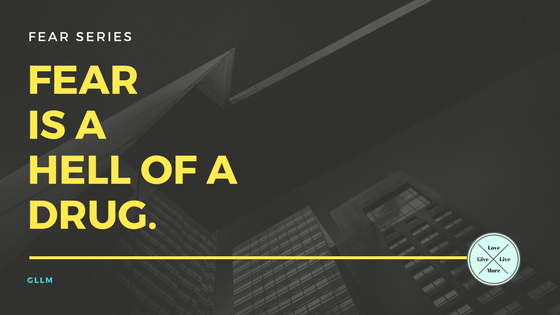 If depression was my most favorite blanket, fear was my comfort food. I’d eat it before I brushed my teeth, ate it three (3) times per day and as a snack between meals. I was consuming fear at an alarming rate. It started off as something I did every once in a while, casually, then escalated quickly into my drug of choice. I didn’t even notice its progression.

But I had no idea I was an addict. It came as a total surprise to me. I thought I was being a cautious, well-planned person. That wasn’t the case. I heard this sermon that led me down a path of checking myself on this business of terror. Then, it hit me: I use the “f-word” so often that it’s passed off as being a useful tool.

After my revelation, I started seeing just how much I used the f-word for everything. I planned my life, consuming fear. And on the off-chance that I did make a decision without fear, rest assured that I looked around and grabbed it to take a quick “hit.” Fear was always within my grasp. I was actually shocked at how often fear was around and how it influenced past decisions, and even when it didn’t. It was nauseating.

Today, I have a different outlook. I have begun eradicating the f-word from my diet. Acknowledging the fear as soon as it surfaces is where I am. I try to catch it as much as possible. That can seem difficult, but not to me because I have hope. One day, I will make fewer decisions with fear in mind. Until then, I’ll try my best to not let fear have its way. And even if fear does get its way sometimes, I won’t condemn myself. I’ll keep making one more good decision; one right after another.