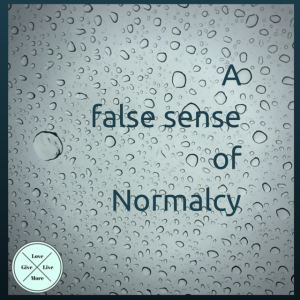 We all want to think that what we’re doing is the right thing. We all have experienced things in life that have changed us forever. Our idea of what is normal can be largely based on what we see in the media (television, social or otherwise). The idea is that we are trying to have a sense of normalcy. But what is normal?

I think that the great secret is that everyone is pretending to be normal (to some degree). There’s nothing normal about anyone, but we all fell into the trap (earlier on) to behave “normally.”

Last week, I went to the grocery store. I put on my Philadelphia Eagle’s shirt and off I went (I had on pants too, you bum)!  When I got out of the car, I noticed a gentleman who was collecting carts afar off, as he started talking about the Eagles to himself (I realized that he probably had seen my shirt).

[Time out: What I’ve noticed about this grocery store is that the people in charge of organizing carts appear to have special needs (or to be not normal).  Time in.]

He began speaking to me by saying,”What I like about the Eagles, and my name is Paul by the way…..” He attempted to partially show me his name badge, took off his glove and gave me a fist bump.  It was then that we entered into deep discussion about the Eagles.

While he spoke favorably about my sports team, that’s not what I admired most.  Although he may not have followed social norms (by talking within a certain decibel level), I enjoyed the experience very much. What I liked most was his ability to be Paul, and I instantly loved him for it.

We talked for about two or three minutes and then he walked away, abruptly ending the conversation (albeit I was in mid-sentence).

Although my day was visually gloomy (due to never-ending rain from the impending storm), Paul lit up my day.

Thank you Paul for conveying honesty and acceptance by simply talking to this Eagles’ fan. I love you, brother.

2 thoughts on “A False Sense of Normalcy”