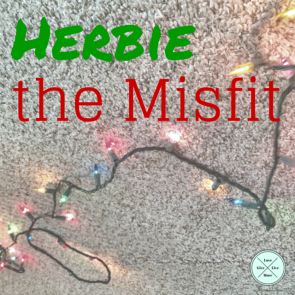 Well, there you have it.  I’m a misfit.  No ifs, ands or buts about it.  I was in denial for many years, but now I know it describes me perfectly.  While I was watching one of my all-time favorite holiday shows (Rudolph the Red-nosed Reindeer), I had an epiphany: I am truly Hermey the misfit.

As the story is told Hermey was an elf who wanted to be a dentist, but was ridiculed by those who looked like him for such an absurd thought.  So, Hermey decides to leave his home, because he doesn’t have any peace.  He even created a song to aid him in wallowing in his misfit-ism.  Feeling alone, he finds his way to a place where they all share a common trait: They’re all misfits.  Hermey finds strength, courage and pride in being what he’s been all along, which is an outcast.  Suddenly, he didn’t feel bad for being a misfit.

I, too, felt for many years that I didn’t belong.  I felt like an alien in my way of thinking, particularly because I was different from everyone else.  But, I wanted to be accepted by those who looked like me.  I was ridiculed for having proper diction and maybe not-so-cool clothes.  As a child, that could’ve been devastating (and sometimes, it was).

It wasn’t until I moved away from home, that I started to meet people who allowed me to be myself.  They showed me the way to self-acceptance, letting me know that I’m awesome (my nucleo-family reminded me of my awesomeness for years, but I never believed them).  Nowadays, I never knew that being a misfit could be so good.

So, if you’re feeling like I once did, just think remember that it’s great to be a misfit!